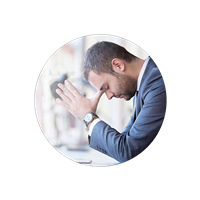 The Number One Reason Agents Struggle Has Nothing to Do With how good they are at the technical parts of the business, or their work ethic or people skills. Great agents fail every day, and it's simply because they don't have a real business "system", so every day essentially consists of chasing a "to do" list and putting out fires.

If you do not have a clear, detailed business system (key word, system) that you are using to move methodically to your goals…a plan you could show a banker or investor or new partner or key associate…a plan you have reasoned, complete confidence in, you will always work too hard for not enough money. Worse than that, agents leave our industry in droves, not because they're not great at working with clients, but because they simply can't make the business work. They don't have enough leads, they don't find enough time to properly follow up and thus convert their leads, they don't know exactly why they win or lose a listing. Even though they work very hard, too much is left to chance. Trying to "do it all" ultimately becomes the trap that swallows them.

Craig Proctor's Millionaire Agent-Maker is uniquely positioned to deliver real, current and proven solutions to Real Estate Agents and Brokers. While the cornerstone of the system is "Reverse Prospecting" (an inexpensive and automatic lead generation system where qualified prospects actually hunt down the agent rather than the other way around), the system also teaches highly effective scripts, conversion and presentation systems which enable agents to have more money, more time and more freedom in their lives.

Proctor was twice named the #1 agent in the world for RE/MAX, was one of the top RE/MAX agents in the World throughout his 20+ year career, and has won every possible RE/MAX Award. As an agent, he consistently sold more than a home a day (over 500 homes a year for annual GCI of almost $4 Million), and his success has been profiled in media across the country. As a Real Estate Trainer, Craig has Coached more agents to Millionaire status than any other trainer. Rudy Kusuma of Rosemead, California and Ahmad Shalforoshzadeh of Toronto, Ontario are great examples:

"While I've worked hard to get to my current level of success," said Rudy Kusuma of Rosemead, CA, "hard work didn't always translate into the kind of life I yearned for. I may have achieved a level of financial success, but what it took from me and my family in terms of time was, quite frankly, unforgiveable. It was only when I decided to investigate, and then to embrace, Craig Proctor's Millionaire Agent-Maker System that my entire life turned around. Let me give you some specifics:

• One of my boys is 3-1/2 and the other a year old. Because I was never home, and my wife was working a 9-5 job out of the house, we decided to send our youngest to live with my in-laws in Indonesia so they could take care of him and give him the time we were unable to ourselves.

• Now, I weigh 170 lbs and have been keeping this healthy lifestyle since January 2013. I eat healthy (no more junk food) and exercise at least 3 times a week.

"Craig's Coaching program has totally transformed my life. It has enabled me to vault up the Re/Max charts and become very wealthy, but more important than that, it has literally brought my family together - that's priceless!!!

"UPDATE: We just received rankings from REMAX LLC. Our team is currently ranked #1 in San Gabriel valley, #3 in California, #21 in US."

"After a month of learning, and working with Craig's system, we did our first CP deal which made us feel very confident!," said Ahmad Shalforoshzadeh of Toronto, ON. "By the end of the year we had earned $212,000 gross commission. Then, last year, our second year in the program, we made a Quantum Leap and more than doubled our gross commission to $480,000. This year, we projected to gross $1,000,000 commission and in the first half of the year, we have already reached our goal.

"I can't imagine how far we've come in such a short period of time. Having this business is not a dream anymore but a goal to achieve. 3 years ago, it was just my father and I, and we had a "job". Today we're at 3 ISA's, 7 OSA's, 1 Admin and 1 Graphic designer and we own a successful business. We've never made more money than we do now."