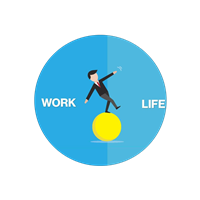 Work / life balance is a serious challenge in our industry. Real success in any business means not only healthy earnings, but also time off to enjoy life. The fact is that most agents are slaves to the process. They may be great with people, great with the technical parts of the business, and work very, very hard, but the reality is that great agents fail every day, and it's simply because they don't have a real business "system", so every day essentially consists of chasing a "to do" list and putting out fires.

If you don't have a real business system, you don't really have a business at all. What you have instead is a "job", and for many, it's a really bad job: one that consumes your time, keeps you away from friends and family, and doesn't pay very well.

The fact is that agents leave our industry in droves, not because they're not great at working with clients, but because they simply can't make the business work. They don't have enough leads, they don't find enough time to properly follow up and thus convert their leads, they don't know exactly why they win or lose a listing. Even though they work very hard, too much is left to chance. Trying to "do it all" without a clear understanding of what works and what doesn't ultimately becomes the trap that swallows them.

As revealed in the profiles on this page, creating a highly profitable real estate business is certainly possible, regardless of whether you're a brand new agent or have been in real estate for years, whether you're a man or a woman, a solo agent or team, whether you live in the U.S. or Canada, and regardless of which franchise you're with. Each of the agents profiled credited the same real estate system as being responsible for their success: The Ultimate Real Estate Success System pioneered by Craig Proctor.

Not only is Proctor's system responsible for more Millionaire Agents than any other real estate system, but Craig Proctor was a highly successful AGENT himself for more than 20 years. No one in Canada has sold more homes than Proctor has, and by sharing the system he used to achieve his own success, he's been able to help over 30,000 agents worldwide to transform their real estate jobs into highly lucrative real estate businesses.

This is the same system Proctor used himself in his own highly successful real estate career right here in Canada. As you may know, he was twice named the #1 RE/MAX agent in the world and was in the top 10 for RE/MAX International for 15 years.

If you do not have a clear, detailed business system (key word, system) that you are using to move methodically to your goals…a plan you could show a banker or investor or new partner or key associate…a plan you have reasoned, complete confidence in, then why wouldn't you examine Proctor's Ultimate Real Estate Success System - free?

For a limited time, you can do exactly this by attending Proctor's upcoming Free Discovery Day, details of which you'll find on this site.

(A 2016 snapshot of agents' success from across the country)

Years in the Business: 6 Years

"Before I met Craig Proctor in 2011, I had little business and was NEVER sure where my next deal would come from. I was facing foreclosure on two rental homes I owned, had started bankruptcy proceedings, and had less than $100 in the bank.

"The system Craig shared with me changed all that. Last year I did $700k GCI and received the RE/MAX Hall of Fame award.

"This year we'll easily do over $1 Million GCI even though I work only 5 days a week and take lots of vacations (I took 6 weeks off last year to visit Indonesia, the Bahamas and Singapore.)"

Years in the Business: 12 Years

In 2010, using the Craig Proctor System, Francis and his wife and partner, Audrey, earned over $1 Million Dollars GCI. They were only 26 years old at the time.

Every single year since then, they have achieved over $1 Million Dollars in GCI, hitting $2 Million GCI in 2015 and on track to do $3 Million dollars in GCI in 2016.

Audrey Bien-Aime was recognized in Real Estate Professional Magazine as one of the top 100 Women who are shaping the future of the real estate industry.

Years in the Business: 2 Years

When Eva started a year ago, she had zero client base and absolutely no business whatsoever. Prior to going out on her own, she was an assistant for another agent.

By implementing Proctor's system from day one, Eva had no bad habits, and within 12 months she did $361,000 in GCI.

"I've never coached anyone who literally copied and pasted as well as Eva did," said Craig Proctor Coach, Jay Macklin. "That's the whole mantra of this system, that if you can copy, you can succeed."

Eva is proof positive of that.

Years in the Business: 25 Years

"I've been using Craig Proctor's system since 1997 (almost 20 years) and my life is completely different because of what he's taught me.

"Craig's systems have been proven successful by thousands of agents from right across the continent. Why reinvent the wheel when Craig already has something so succ

Years in the Business: 11 Years

"Real Estate had become stale for us. We'd plateaued at around $100K GCI and were looking for a new challenge and how to improve our income. This seemed impossible as we were maxed out on time. As Craig would say, we had a job and not a business.

"Meeting Craig and learning his system was mind blowing. Our volume of business increases daily as our skills develop. The best part is that you do not need to create ANYTHING. You just copy, rinse and repeat. Within a few months our business was up 50% and will more than double next year."

Years in the Business: 35 Years

"Before I met Craig, I was about to become the #1 Agent for KW International, but truth be known, I had no systems, no direction, no lead generation systems -- just "old school" real estate. But I had done my research and the common denominator of the most successful agents in my market place was that they were all Craig Proctor students.

"Within 3 years of using Craig's system, I was making annual GCI of $6.6 million. I have my own boutique brokerage, own a beautiful heritage office building downtown, and have 40 people on my team. I could never have done this without Craig's system."

Did You Know That Many Of The Top Agents In The World Also Credit Their Success To This System?

Francois Mackay, #1 in Montreal in Transactions