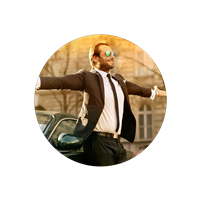 How to Make A $Million Dollars Selling Real Estate

Hi, Craig Proctor here. Allow me to share with you how to get crazy rich selling real estate - how you really can earn a 7-Figure GCI the way so many of our members do. I don't mean just make more money. Just juice the income a little. I mean: SKYROCKET your income. I mean: STUN everybody else in your office - and the flashiest loud-mouth braggart at every meeting. I mean: ACTUALLY HAVE PEOPLE LINED UP, PRE-DETERMINED TO GET YOU AND ONLY YOU to list and sell their home or find one for them - so you have NO competition. I mean: RUB EVERYBODY'S FACE IN IT KIND OF SUCCESS. Visible. Big. Confusing to others. "How the hell is he doing this?" I mean: "GREEN WITH ENVY" MONEY pouring in. I mean: MAKING SO MUCH SO FAST that all your debt is wiped away, your credit cards are clear, the new car you kept telling yourself "no" to is in your driveway, and there's a money flow left over to wisely invest and get rich with. I mean: joining the Evil 1%. (With me.) Needing a financial advisor, a private banker, a wealth manager. I mean: actually living like the people who buy million dollar luxury homes from you. All while working LESS HOURS with LESS STRESS, doing fewer things, and getting greater results. Getting Crazy-Rich in real estate without having a disappointed and disapproving spouse and family.

What you need is a system that works. Not a bunch of ideas. Not walking on hot coals or a bunch of motivational psycho-babble.

I have an absolutely proven system. Not "ideas." Not new fads. A real system. That works regardless of market conditions. Anywhere. Any time. All the time. Now. This year. Next year. It's worthy of your time to investigate because after you work setting it in motion, it keeps working for you, permanently. You can just about "set it and forget it".

Listen, most real estate "trainers" and "coaches" are just rearranging the deck chairs on the Titanic. It looks different and shiny 'n new. It's still the Titanic. It's still headed straight for the giant iceberg. Most of them have adopted the word "system", but what they offer is hype.

Frankly, I'm not the most exciting guy. I approached my real estate career more like a "systems engineer" than an excited, excitable salesman. Maybe my consistency and constancy is boring to some, but the most successful agents in many franchises, over 300 agents with 7-figure incomes, and thousands of agents transformed from years of struggle to success … all of them are using my system.

But this is NOT for most agents. You'd think everyone would run to such a system. But most agents just aren't mature and sensible enough for it or honestly ambitious enough for it.

Get this: crazy-rich level success in this business is NOT about anything "NEW" at all. Sorry. It's about putting the right proven pieces, strategies, methods and tools together in just the right way so that you wind up with 'The SYSTEM That NEVER Fails.'

Crazy-Rich is hardly ever about invention. It's about implementation. Contrary to widely held belief, Henry Ford did not invent the horseless carriage or gasoline engine. He developed a functioning assembly line to make the damn things, and a dealer-franchise system to get them sold. Two systems. Implementation, not invention. Steve Jobs didn't invent computers, PC's or phones. Credit his unique approach to retail and to "product launches" - two systems. Fred deLuca at Subway did not invent cold cuts, the sub sandwich or franchising - but he brought a system to it second-to-none, and got crazy-rich. "IT'S THE SYSTEM" is my rallying cry. I did NOT invent anything in my System. Much of it came from outside of real estate and was revolutionary in real estate, but each piece I put together already lived successfully elsewhere.

Here are the three mindsets you MUST have:

1) You have to be businesslike. Most agents think and act like worker bees, buzzing about, flower to flower, idea to idea, fad to fad, made-in-minutes guru to guru. They never create businesses. Just jobs. You have to think like a builder and developer, not a pirate. Or just a salesman. You have to think like a guy who owns 50 Subway shops or the whole company, not the guy who owns one, or the guy behind the counter making the sandwiches. If you do, what I'll share with you will make sense to you.

2) You have to intend to get and stay RICH in this business. Most agents are content making a living, hanging around the office and drinking coffee like Norm hung around 'Cheers', forever making excuses to themselves and their families, forever waiting for the market to go back to its peak. If these agents do four, five, maybe ten deals in a year, they are good to go for another year. This isn't for those folks. This is for the agent with mid-6-figures to 7-figures on his or her mind AND determined to earn it without selling soul to soul-numbing activities like sitting on the Wish-Chair all afternoon at open houses, doing listing presentations for prospects also having 4 more agents "audition", playing tour guide, pushing business cards on people at cocktail parties, even - ugh! - cold-calling FSBO's and others. You have to be fed up, worn out and frustrated with the way most good-income agents work and everything they trade away for their income AND ABSOLUTELY COMMITTED TO A BETTER WAY OF LIFE.

It's said no team can start winning until they are absolutely disgusted and angry and fed up with losing. You can be making a good income in real estate and still be losing. I know that from firsthand experience I'll share with you.

3) You have to be able to focus and employ self-discipline, to stick with a winning plan once you get one. There's no point in wasting your time or mine if you have the attention span of a ferret drinking Starbucks, the self-control of Donald Trump, and the self-discipline of a puppy. Warren Buffet has not changed his investment selection system one iota in at least 20 years. Disney has gone through two CEO's since Walt. Their system for successful storytelling has never changed or wavered. FROZEN was built on exactly the same premise and template as was Snow White. ADHERENCE TO SYSTEM makes you crazy-rich. Flitting about has you starting over, over and over and over again.

Okay, so, do you think you would value and could stick with a complete and 'no stone unturned', proven, up-to-date but not fad-ish, extremely productive system if you got one? If so, investigate, explore, learn. Request a FREE Coaching Consultation HERE during which we'll share with you how to get crazy rich selling real estate even in the current market. Go there now. This is serious.