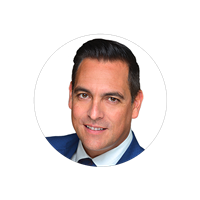 "I started my real estate career two decades ago at the age of 21, teaming up with my mother who was a successful RE/MAX agent in Quebec. I bought her out (so she could retire) five years later.

"My goal at that point was simple. I wanted to become the #1 agent in Quebec, so I investigated what the top Quebec agents were doing and found they were students of Craig Proctor. As a RE/MAX agent, I certainly knew of Craig because he was #1 for RE/MAX World¬wide twice in his career, and top 10 worldwide for 15 years. He was famous for how many homes he sold. Since my own business had plateaued, I decided to see what Craig could teach me. My decision to learn from Craig changed my life.

"I was with Re/Max at this point doing 60 deals a year and working with one assistant out of my home garage. Within four years of implementing the strategies and systems Craig taught me, my sales almost tripled to 150.

"But that was just the beginning. By 2012 I was doing 335 closings a year and was so passionate about how the system had helped me that I accepted Craig's offer to coach other Quebec agents in French. Despite these additional responsibilities, and despite the fact that I am a devoted father of four beautiful daughters, in 2013 my team was the first in Quebec to sell over 400 homes a year.

"Today I operate my own real estate agency (Groupe Mackay) with 37 agents on the road and an administrative staff of 12 while still coaching agents for Craig from across North America. I also lead Craig's Quebec Coaching Chapter. Last year (2018) we hit a new Quebec sales record by selling 650 homes.

"Craig not only changed the way I was doing real estate, he also impacted every area of my life as my success with Craig's system has opened so many doors for me. Throughout 2018 I appeared all season long on TV for an Interior Designer show as the Broker. I'm also highly involved with charities I'm passionate about (honorary president of the Shelter for Abused Women, Muscular Dystrophy, CLSC, an active supporter of children's sport teams, VP of the Lachine Hospital foundation for the past 8 years). My team is currently specializing in new construction and is now representing major builder such as Sololoft, Bobois and Rose Philip 2 with Vivenda, Prevel Alliance, Condo Aera with Katello, and Flora with VillaNova, the biggest project in Quebec.

"Being part of Craig's system has been a wonderful adventure and I like to say that as far as I've come, I'm just starting!

"Craig's system has changed so many agents' lives. The system evolves as the market evolves so we're always on the cutting edge. Throughout all of it, though, Craig is an incredible mentor. Despite his success and knowledge, he's very down to earth and really cares about our success."