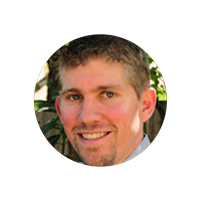 "I was a high school art teacher for four years before I got into real estate. I met this real estate agent when I was buying my first house. She showed up in a shiny Lexus -- and I wanted one! Well, you can't get a shiny Lexus on a school teacher's salary, or very few people can do that - unless you're just working forever to do it. And I was already doing that! I was spending 80, 90 hours a week between teaching and coaching basketball, making about 40 cents an hour once all was said and done. I was also about $50k in debt, so I knew I needed to find something better. I liked the idea of being my own boss and making lots of money. I figured if my agent could do it, so could I. So I went ahead and got my real estate license. About six months later, I quit teaching and went into real estate full time.

"I think the biggest surprise when I first got into real estate was how much harder it was than I thought. I was 25 at the time with no business experience. I didn't have any credibility and it was very hard to get clients. My broker told me to follow around the experienced agents and do what they were doing. Well, mostly what they were doing was contacting their sphere of influence and working past clients, and I had none of those. So they told me to jump on phone calls, answer the up-time phone, sit at open houses . . . things they no longer needed to do and didn't want to do, so they had somebody do it for them -- i.e "me".

"It was really tough. I worked at it for about 8 months and only sold 6 homes even though I was working 60-80 hours a week. That doesn't really equal a whole lot of income. I was actually making less as a real estate agent than as a teacher.

"I saw a big full-page ad talking about how successful this young agent from Oklahoma had become after he started using Craig Proctor's system and I thought, 'If this guy can do it, why can't I?' I got Craig's system and was blown away by how simple everything sounded and how easily you could create leads without having to do the hard things in real estate like doing open houses and cold calling. It got me really charged and I think I only slept an hour or two hours a night over a three-day period because this stuff was running through my head the whole time. It was amazing actually. I started bringing in contracts consistently on a monthly basis. I closed 26 homes in the next six months and that was just off one little ad Craig gave me that only cost about $25 to run.

"My career has really taken off. My second year in real estate I did 53 transactions and I increased that by almost 70% the next year to 89 transactions. The year after that we did 113 and every single month I made more money than what I used to make in a whole year of teaching. Craig showed me how to easily make more money per transaction too.

"A year and a half ago (with still two months of the year to go), I crossed the 1 Million mark in annual commissions! I was so excited that I reached this milestone. I'm still only in my mid 30s. and can't believe how far I've come in such short time.

"The best part is that I only work about 40 hours a week and can take a lot of vacation time … 4-6 weeks a year. My wife and I have since started a family, so it's perfect to have that family time, and because we now have great money rolling in, she was able to quit her job and stay home with our children. I can't tell you how important this is.

"A few years ago my sister was very ill with only a 50% chance of surviving. She was actually in a coma for two weeks, and I was there for the entire six weeks she was in the hospital. The doctors now say it was a miracle that she survived, and the most rewarding part for me was when she was asked after the fact if she was conscious of anything while in the coma. She said to me 'The only thing I remember was you. Hearing you and seeing you.' The amazing thing is that during that whole process, my business still ran. We still closed transactions. We still listed homes. That is the ultimate business dream and I just thank Craig and his system for allowing me that opportunity to do that. One of the biggest benefits of building my business the way Craig has shown me to is that it's allowed me opportunities to do things I could never have done previously. I couldn't do those things and still make money. I would have lost my job. We just copy everything Craig does and it works exactly the way he says it will."